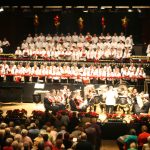 For 2010 the Derby Hospitals Choir Annual Christmas Charity Concert was specially produced to raise money for the Derby Branch of Parkinson’s UK. The sizeable Hospitals Choir was conducted by John Bucknell with accompanist Andrew Storer.  An enjoyable evening of musical entertainment was ably supported by the Derwent Brass band and the guest compere was Steven Blakely, well known from ITV’s ‘Heartbeat’ series. 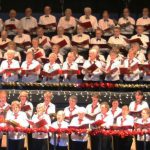 The Hospitals Choir, a chorale of more than 130 singers, with their clear precision and wonderful balance always give that extra dimension to their concerts.  Singing more than 15 pieces, ranging from Handel’s Zadok, the Beatles’ Let It Be and Irving Berlin’s White Christmas the choir were in superb form.  ‘Danny Boy’, recommended by soprano Kathy Grieg, was a great choice, audiences love it and the choir did not let them down.

But surely the highlight moment in the concert: The Marvellous Birth by Chilcott.  This is really not a particularly well known piece and was recommended to the choir by alto Gill Meyer.  What a find, the soprano and alto harmony was truly quite beautiful, a very moving and emotional performance

Derwent Brass under the guest direction of John Davis, as always, were in fine form playing music by Peter Graham and Darroll Barry alongside Mel Torme and Gordon Langford.  One special highlight was a solo version of ‘You Raise Me Up’ played on the baritone, (Bb horn), by Carole Crompton. Especially performed as a thank you to the Royal Hospital for treatment she had received recently.  Carole is one of the Country’s top soloists and over the years has played for most of the Country’s Top Brass Bands including Fodens and a long time with Desford Colliery Band during their hey days.

Other items in the programme included a humorous and very poignant piece, describing an everyday account of living and coping with Parkinson’s by Sheila North.  Whilst, Steven Blakeley had the audience in stitches with an amusing reading about ‘Preparation for Christmas Festivities’ by Pam Ayres