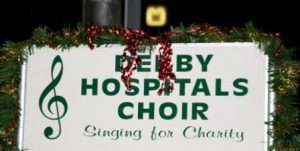 The Assembly Rooms venue itself, beautifully decorated and professionally set out for the evening and packed with choir, band and audience, had an air of warmth and expectation. The concert was introduced by Thomas Plant who stepped in at short notice due to Charles Hanson’s illness. Thomas proved to be an excellent compere and jollied the concert along with humour & sparkle, never forgetting the fund-raising objective of the evening.

The choir opened the concert with two Rutter items; Jesus Child and What Sweeter Music – What Sweeter Music contained some particularly tender and balanced singing. This was followed by the first of four Derwent Brass slots. This article is primarily a review of the choir, but it is impossible to review the concert without noting what an excellent, professional sound the band produced under their conductor Keith Leonard, with both Christmas and non-Christmas music well chosen to fit the themes of the evening. Congratulations also to David Johnson for an accomplished and balanced choir accompaniment throughout.

The second choir set was film music: Walking in the Air had good sustained singing with some nice swells on the phrase ends, a dramatic “suddenly” and a good pianissimo ending; Hallelujah – one of the highlights of the evening – gave the choir an opportunity to sing with confidence, good diction, punctuation and a lovely closing crescendo & decrescendo; lastly Bare Necessities was the most foot-tapping piece of the evening, sung with enthusiasm & energy – helped to romping conclusion by piano & drums – impossible to sit still listening to this one! The choir concluded the first half with the Lion King Medley – though this could have had clearer syncopation in “Can you feel” – it was an enjoyable performance and ended the first half with a fabulous crescendo on the final chord of the Circle of Life.

The second half began with the rousing Grand March from Aida for Band, Piano & Choir – the overall effect was a grand and balanced sound with the choir entry living up to the band’s introduction and coping well with the particularly high operatic setting – here some of the tempo changes were not quite together between band and choir – but an impressive sound nevertheless – and what a super march tune! A big contrast then with the following unaccompanied Gabriel’s Message – where gentle expression, clear words, balanced harmony and real sense of meaning created a little gem. This was coupled with ‘All things Bright & Beautiful’ which was sung well – just lacking the resonant acoustic it enjoyed earlier in the year at the Cathedral’s Florence Nightingale memorial service!

The next choir set included David Johnson’s lovely setting of Silent Night – another highlight – I particularly enjoyed the control the choir exhibited here, especially in the final verse. This was followed by David Henshaw’s contrasting arrangement of the lively Calypso Carol which bounced along with confidence and good rhythmic drive. The choir’s final pair comprised the unusual, jazzy arrangement of Follow that Star, sung with appropriately laid back yet rhythmic panache, and the classic Holy City– sung perhaps with most positive force of the evening, with the final sustained chord a great way to end a concert.

But wait! – the choir had not finished – what a glorious descant rang out over the top of the concluding audience carol – Titled: Hark the Herald Angels Sing – Yes, they did & I heard them that evening.