This year’s concert was held in Derby Cathedral because the Assembly Rooms were closed, providing both challenge and opportunity – sightlines were less clear, seats less comfortable and facilities more limited – but for me these were more than outweighed by the splendid acoustics – and the Cathedral staff had worked hard to ensure that the Cathedral looked a splendid setting for such a concert.  Popular local celebrity Charles Hanson compered the evening, keeping us entertained between items with a mixture of bonhomie and cracker jokes! 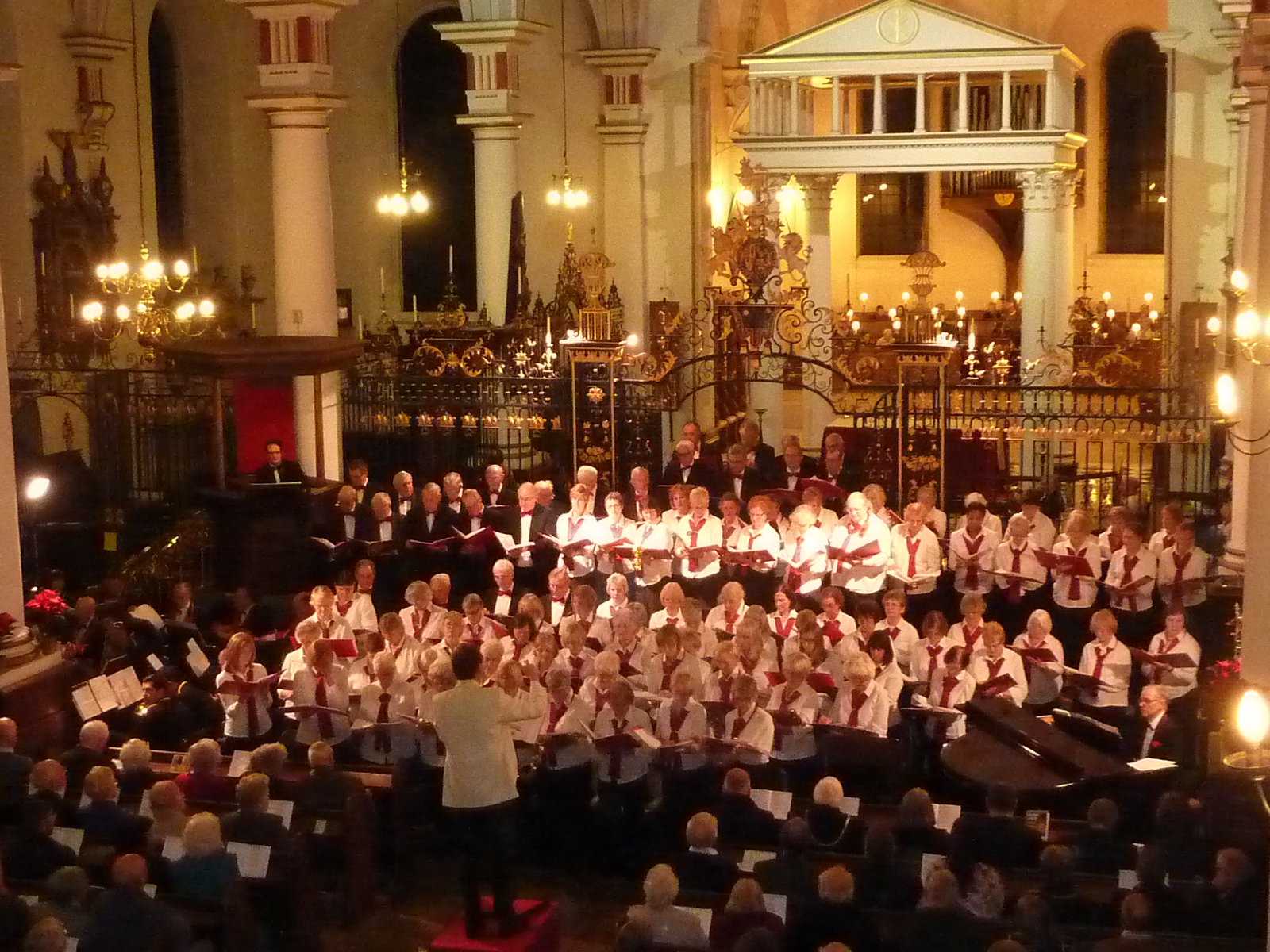 After the opening carol, the concert began with a controlled performance of Harold Darke’s In the Bleak Mid-winter including a gentle solo from Gillian von Fragstein and some nicely balanced unaccompanied choral singing.  This was followed by You Raise Me Up with a haunting flute solo by Julia Auer (one of the highlights of the evening, though the MD could have taken this a little quicker) – congratulations also to the semi-chorus who at one point sang over the rest of the choir.

Derwent Brass reminded us how skilled they are with a well thought out selection of items – some lively and syncopated, others smooth and mellow.  They handled the Jazz Suite’s complex rhythms effortlessly under Keith Leonard’s polished direction.  It was a pity we could not see the band more clearly – it was always going to be a squeeze to get 160 performers in – but actually you did not need to see them – just to close your eyes and listen.   Likewise It came upon a Midnight Clear and Good Swing Wenceslas had a good contrast of styles.

Two sacred choral pieces– How Can I Keep from Singing & For the Beauty of the Earth – followed, with clear diction in both and a particularly fine ending to the former, aided by Tom Corfield’s sensitive organ accompaniment.  The foot-tapping The Lion Sings Tonight gave the choir their first opportunity to let their hair down –performed with bounce and obvious enjoyment. Adiemus had a sense of growth from the lower parts coupled with exciting interjections from the 1st Sopranos and another opportunity to hear Julia Auer’s spine tingling flute playing.  The first half closed with a tremendous performance of Every Time I Feel the Spirit; the choir particularly excelled themselves in the driving, rhythmic A-Capella section, leaving everyone feeling upbeat for the interval.

Jingle Bell Rock was given a new lease of life as it gradually got faster and faster, contrasting nicely with the laid back jazzy Come Emmanuel containing some great dynamic contrast and reminding us of the true meaning of Christmas. The Band then played The Wonder of Christmas – a lively compilation of Christmas tunes, and Sweet Little Jesus Boy – performed with a beautifully tranquillity.

The Rose was sung with delicacy and pathos, sensitively accompanied with a “hear-a-pin-drop” ending.  Though there was a moment in this piece when the men got a little ahead, generally credit should go to the men throughout the concert in overcoming the imbalance of forces with the ladies. More men please!  Bridge over Troubled Water was an enjoyable arrangement written for the choir and was much appreciated by the audience.  All greatly enjoyed the Wartime Sing-Along and the audience seemed unfazed at being asked to reprise two of the tunes simultaneously…

The final section comprised a lively arrangement by the M.D. of Cantemos a Maria sung with great joy, and the uplifting O Holy Night in which Gillian von Fragstein soared over the choir aided by the splendid acoustic of the Cathedral.  A fine way to end what I overheard many saying was their best concert yet.  Fabulous!