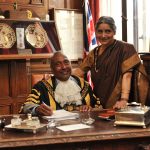 Sheila North Chairman of the Derby Branch of Parkinson’s UK

Mayor and Mayoress of Derby

The Mayor is particularly pleased to be associated with the Derby Hospitals Choir fund raising activities.  Traditionally, each year the Derby Mayor supports a number of health related charities.  By coincidence the St John Ambulance will be one of the Mayor’s beneficiaries, an organisation the choir has supported in the past.